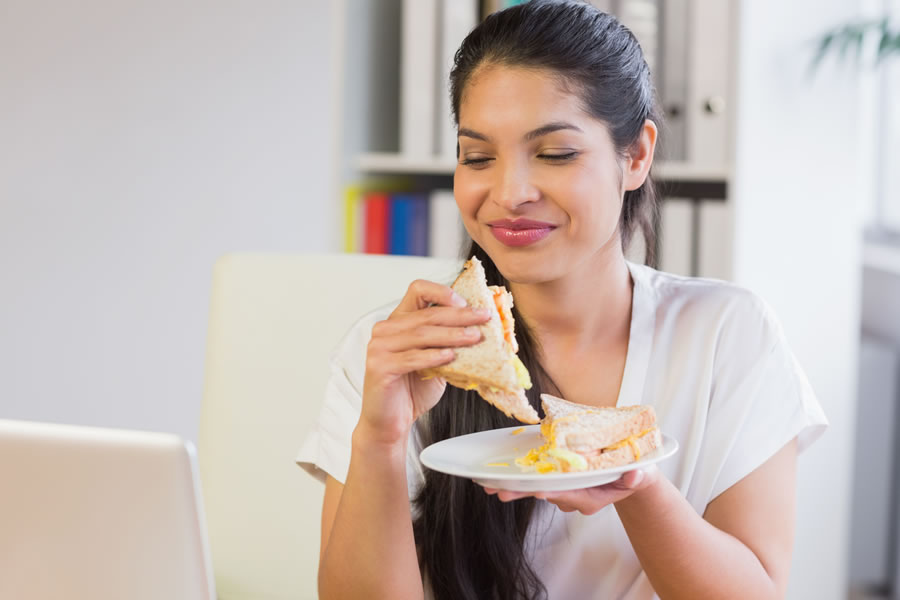 The new lunch break consists of 30 minutes of eating limp sandwiches and surfing gossip sites according to new research released today, which charts the rise of ‘Al-Desco’ dining.

A new study finds the majority of people are failing to take a break throughout the day withonly two in ten (22%) Brits surveyed managing to take a full hour for lunch.The research has found that over three quarters of Brits (79%) said they do not dedicate a full hour for their lunch break, with the average office worker taking less than 30 minutes for lunch.

Of those surveyed, 51% of employees believe they have too much work on to take a break and the majority (83%) rarely venture outside of their office for fresh air.Alarmingly, 4% of Brits admitted to being worried about taking a proper lunch break for fear it will make them look bad in front of their colleagues.

63% of those surveyed admitted they work through their entire lunch break, according to a poll of 2,000 full-time workers by crisp brand Kettle Chips®, who are encouraging people to upgrade their lunchtime and make the most of their midday break. Research also reveals the average working Brit will eat the same meal for lunch three times a week.

Two-thirds (67%) of employees are eating ‘Al-Desco’ every day (lunching at their desk), whilst three in ten reply to emails or pick up their work phone while taking a break.They're also much more likely to eat alone, with 65% reporting doing so.Results from the study revealed thatBrits working through their full lunch hour is equal to 271 days (three quarters of a year) free work over the course of a lifetime. In fact,findings revealed that over half of Brits (63%) admitted they work through their entire lunch break and shockingly 6% admitted taking a shorter lunch break just to please their boss.

Kettle Chips® spokesperson, Kizzy Lilburne said:“We want to remind people that lunch is not just important as a way to refuel, but that it also gives people the chance to take a break and see something different. We are encouraging people to find that sometimes elusive patch of grass and make time at least once a week for a  lunchtime treat, whether finding the time to relax or switching the soggy sandwich for something more exciting”

The new research led to an experiment by Kettle Chips who set out to highlight the importance of enjoying your lunchbreak by giving office workers in a London park an incredible lunchtime experience. Kettle Chips rigged Tavistock Gardens with hidden cameras and gave office workers an unexpected surprise as an undercover actor put on an amazing lunchtime performance. Office workers were left stunned, confused and surprised as they were invited to join the undercover actor in an ingenious lunchtime preparation routine. Watch the video here

The study byKettle Chips® also reveals that variety isn’t the spice of life, as8 in 10 people (88%) admitted to eating the same lunch week-in-week-out whilst at work, with sandwiches being far and away the most popular within the group surveyed.